The last four decades have not been kind to Earth. The Durog Invasion witnessed destruction on a massive scale, and nuclear war lead directly to decades-long nuclear winter. S.E.A. prepared for this, but their preparations were enough only to assure a fragment of humanity survived. It took innovations like the Braxler Bacterium (B2) to see to the salvation of Earth itself.

In January 2014 the Durog Invasion began. Their bombs devastate every major population center leaving behind something even worse than nuclear radiation. Next come their colony ships. Enormous vessels which they land all across Earth clearly intending to use them as staging areas for a ground invasion. S.E.A. responds almost immediately. Every colony ship is targeted for annihilation. Failure is not an option. Thousands of nuclear warheads are launched. No colony ships survive this counterstroke but the price is heavy. Millions of humans are killed and Earth itself is left in ruins, the atmosphere poisoned and the precious sun blotted out.

Sixty days after the invasion began more than two billion people are dead. The months that follow are hellish. With nuclear winter setting in, S.E.A. and the durog begin a ground-war with no regard for civilian casualties. Battles are fought in both remote and heavily populated areas. Towards the end, as it becomes clear they will lose, the durog change tactics and begin targeting civilian centers. Another billion people die before S.E.A. finally ejects them from the planet in 2015. Although in space the invasion will drag on for another three-and-a-half years, for Earth it has ended.

Before 2014 there were many theories about nuclear winter. The worst of those came true. As the bombs fell and the atmosphere became saturated with smoke and soot the sun was darkened and the temperatures plummeted. Global temperatures fall by an average of 18°F with North America and Europe seeing even more dramatic swings - as high as 70°F in places. The sudden temperature shifts cause food production to stop immediately. Stockpiles have been prepared by S.E.A. but distribution is a nightmare that is aggravated by the ongoing war between the durog and S.E.A. Starvation is rampant.

In 2016 the fighting on Earth is over but the dying is still going on. People have learned to adapt to the cold but there can be no adapting to radiation poisoning or to the Creeping Dark. The Creeping Dark is a parting gift from the durog. It's what their bombs leave behind. It saturates the body and soul. Most prefer death. This is the environment in which the New Earth Consortium launches its massive marketing campaign to draw people to Olympus. The city of the future. Thanks to the effects of the Braxler Bacterium, the New Earth Consortium can offer people a world that is not unlike that which they knew before the war. The skies are darkened and the temperature could be warmer, but the air is clean and there is no radiation. Olympus becomes an instant success.

But some people still live outside Olympus and a handful of other 'safe' places. Out in the radioactive wastelands of Earth, the Radlands as they will come to be known. Cut off from 'civilized' society, these people are changed. Surprisingly they do the impossible, they adapt to their irradiated condition. Some die but many do not. Many survive. Changed. Mutated.

Slowly life begins to achieve a sort of new normal. Over the fifteen years that follow temperatures slowly begin to retreat from the frigid temperatures of the Deep Freeze. To this day they have not fully recovered, and it may be that they never will, but humanity has found a way to survive, to flourish even.

By the year 2020 Olympus is a massive and growing city. Braxler has licensed B2 to several other smaller ventures and, thanks to S.E.A., Thebes is a safe haven for millions. Despite this there is simply not enough room for everyone and many people suffer in the Radlands. With the war over, S.E.A. offers an alternative. Colonization. People sign up in droves and shiploads of settlers begin launching into space for faraway places. Some find relatively nearby homes, such as those that settle on the Moon or Mars while others travel to deep-space locales. The Exodus continues for years before it finally subsides in 2025 as S.E.A. terminates its colonization program. By this time half a billion humans have scattered into the galaxy.

In the first years after the invasion humanity was concerned only with survival. Then came the New Earth Consortium and Olympus. Life inside Olympus was starkly different. Here the streets were free of pollution, food was plentiful and homes were provided. All the basic needs of people were taken care of leaving them with time. With the opening of Sothis Station in 2023 Earth was suddenly plugged in to a new market, an intergalactic economy. Earth companies recognized the opportunities immediately. Before the year ends all currency has been replaced with the intergalactic credit. The pursuit of wealth on a massively expanded scale is in. Corporation that once had their eyes set only on Earth now look out across a galaxy and see power, wealth and influence as they've only imagined.

Propped up by massive profits the companies of the New Earth Consortium are on the forefront of this wave of corporate expansion. Offices are opened on Sothis Station. Trade routes are established. Companies already bloated with money become even richer. Secret laboratories are opened on Earth and off-planet. Technology begins to advance at unheard of rates. A new privileged class is born but it is not those born to privilege. Instead it consists of the men and women that work for one of the megacorporations. These megacorps have immense power and influence. In many cases their annual earnings eclipse the entire economies of alien species. Human governments are afraid to alienate them and, increasingly, so too are non-human governments.

Society fractures along the lines of those that work for the megacorps and those that do not. Laws are applied differently to those that do. Resentment between the have's and have-not's grows daily as do tensions between S.E.A. and the megacorps. There are those that believe war looms... 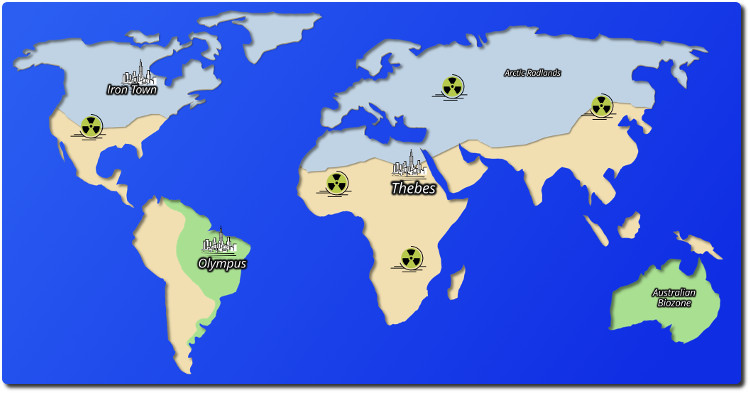