Light leaks out through open windows from Greenbriar’s taproom, beyond which a short halfling stands behind a bar of polished cherry wood. A two-story barn and detached kitchen complete the complex.

Greenbriar is Erien's only inn and tavern and it is owned and operated by Handel and Sarey Firth. Greenbriar consists of a taproom and a large common room for visitors. Those wanting privacy can sleep in the barn loft.

Sometime in late fall, when winter weather brings the lumber work to a halt, Handel closes up Greenbriar and winters over in his home. On rare occasions, he’ll open the place up and fire up the hearth for visitors, but it’s generally closed down during this season. 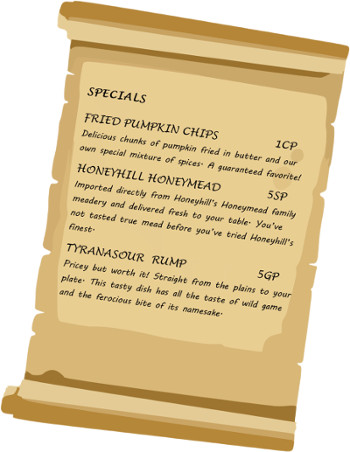 On weekdays, the place is quiet and slow. After the sun goes down, it picks up a little but never gets too rowdy. This changes quickly on the weekends when the lumberjacks descend on Greenbriar, pockets laden with coin they wish to spend.

The text of this page is licensed under a Creative Commons Attribution-ShareAlike 4.0 International License
Attribution: Valley of the Kings by Embers Design Studios authored by Lucas Curell